Treatment and stages of colorectal cancer

Colorectal cancer develops along the inner lining of colon or rectum and is the most common cancer in Singapore. It is the top cancer for men, and second only to breast cancer for women. Singaporean Chinese males are at most risk as they have one of the highest age-standardised incidences of rectal cancer in the world.

The most effective way to prevent colorectal cancer is through screening.

Colorectal cancer most commonly tends to arise from pre-existing polyps (small growths along the lining of the colon). Polyps may be present in up to 25% of people aged 50, and they become more common with age.

While these polyps are largely asymptomatic, they can undergo genetic mutations over a period of five to 10 years, and become cancerous. Screening helps to pick up polyps so they can be removed before becoming cancer.

When cancer does develop, it starts in the innermost layer of the colon (the epithelium) before breaking out and spreading to the other layers of the bowel wall. The cancer cells can grow into blood and lymph vessels, and travel (a process known as metastasis) to other parts of the body. 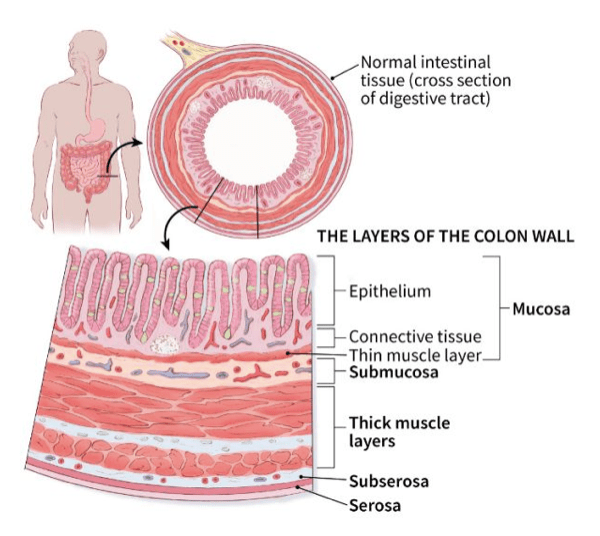 After a diagnosis has been made, doctors determine the best treatment options and calculate survival statistics by categorising the spread of cancer in stages. The higher the stage, the more serious the cancer. However, colorectal cancer is highly curable if caught early.

Surgery is the first line of treatment for colorectal cancer. In the earliest stages, surgery alone can offer high cure rates. The cancer is removed with the surrounding lymph nodes and sent for further examination to confirm the stage of the disease. In most cases, the intestines can be reconnected and normal bowel function is restored.

Other treatment options include radiation therapy which uses X-rays to kill cancer cells. Radiation is often used for treatment of rectal cancer and can be given prior to surgery to shrink a tumour, or after surgery to reduce the risk of local recurrence.

Chemotherapy involves taking drugs that are ingested by mouth or injected into the bloodstream to destroy tumour cells that have spread to other parts of the body. They hinder the growth of cancer but can have unpleasant side effects. Nevertheless, chemotherapy helps patients with incurable cancer to live longer.

Other treatments for advanced cancer include:

This article has been fact-checked by Dr Denis Cheong, colorectal surgery specialist of Surgi-TEN Specialists at Farrer Park Hospital.

More articles are on the way.